I wanted to stop people on the street and say, “I don’t hurt any more!” 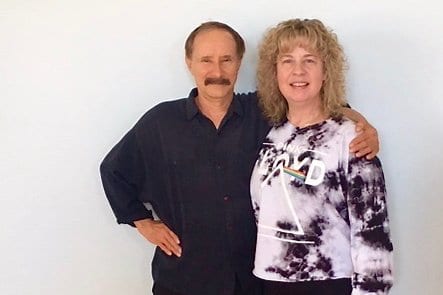 Kaye lived with debilitating back and then hip pain for seven years. After two days of Yin yoga training with Paulie Zink she was able to walk without pain. This is her story: My name is Kaye Sitko. I am 51 years old and live in Minnesota.

In April of 2012 I injured my back at work. I have been lifting boxes that were too big and too heavy for over 11 years.

In September of 2012, a surgeon performed an L5 [Lumbar vertebra] discectomy on me. Immediately upon waking up from the surgery and I was in more pain. This was now the start of my being put on morphine 24 hours a day. I was on high doses of morphine every day for a little over four years. I began my search for a new surgeon.

In January of 2013, my new surgeon recommended that I have a fusion of my L4 through S1 [Sacrum]. Worker’s Comp did not want to approve this surgery. They had me go through many months of physical therapy, including the therapeutic pool. Nothing helped my level of pain. In fact, physical therapy often made me hurt more. It took 18 months for worker’s Comp to approve my fusion surgery. Because the nerve was compressed for so long, I have permanent nerve damage running down the right side of my leg. I could barely walk with the use of a cane. I had  poor balance and was unable to balance on either foot. The surgery was finally performed in April 2014.

After the spinal fusion, I started to complain about hip pain. At first it was on the outside of my left hip. As time went on it would go from the outside hip to inside the groin area and sometimes including the right side groin area as well.

At this point Western medicine had brought me to the end of their line. They looked at me and said at this time there is nothing more we can do for you. I was angered by this. I knew there had to be more.

I had been seeing a massage therapist. I wasn’t able to climb the flight of stairs for my massages so she had to bring all the equipment down to accommodate me. One time she mentioned that she was also a Bikram yoga instructor. She thought the heat of the room and the yoga asanas could really help me. I had tried everything else. So I figured I might as well give this a try.

That same evening I experienced my first Bikram yoga class. During the class I thought for sure I was having a heart attack. It was the first time in over four years that my heart rate had been accelerated. As I got home, dragging my ass through the front door, I had a smile on my face from ear to ear. I knew I had found what was going to fix me. Soon afterward, someone told me about Yin. They thought I would really enjoy the class and encourage me to try it. They were so very right. I have now learned that it is the combination of the two yoga’s that have helped me with my disabilities today.

In the past two years I have been to several doctors, including hip specialists and neurologists at leading medical facilities. No one had an answer for me. No one knew why I was having pain. I couldn’t walk any further than only 1 to 2 blocks. The pain was horrible.

Recently I went to Paulie Zink’s Yin yoga teacher training course. After spending two days with him, about nine hours of Yin yoga, I was able to walk with zero pain. I could not believe it! I wanted to stop people on the street and say, “I don’t hurt anymore!.” I knew I sounded like a crazy woman, but I knew what I could feel, or should I say, couldn’t feel anymore. I now know what movements I need to continually work on in order for that hip pain to stay at bay.